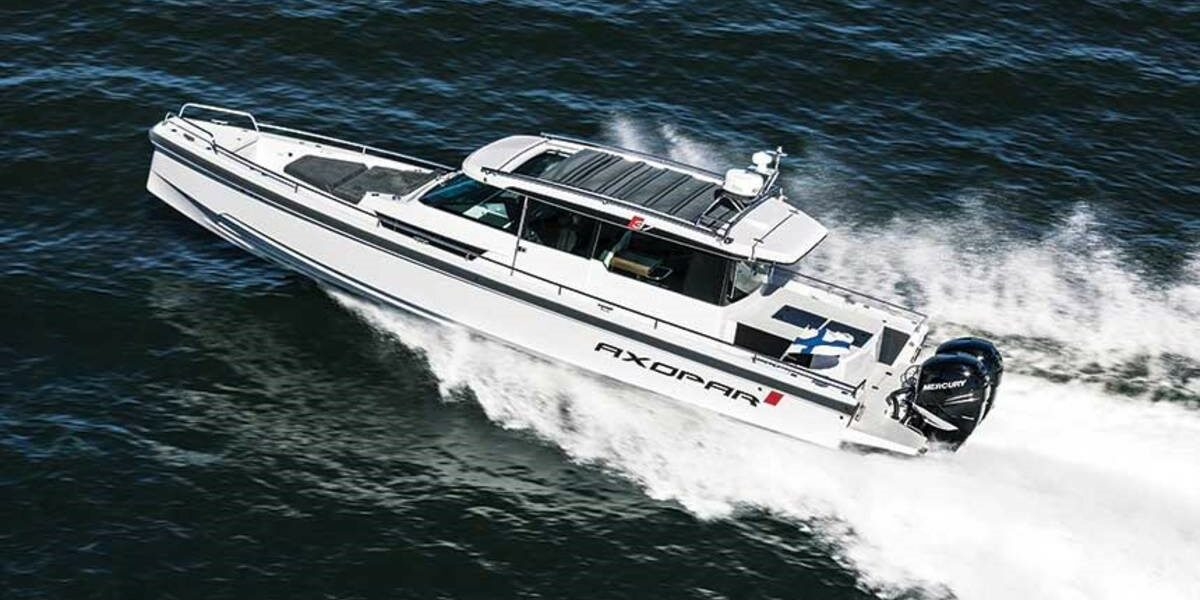 The sun is barely over the horizon when Maine’s Casco Bay appears before us like a sheet of glass. We want to open up the throttles, but a flock of scoters is blocking our path. As we close in on them, the sea ducks take to the air, peeling off to port and starboard like little jet fighters. Ben Knowles of East Coast Yacht Sales gives them time to scatter, then pours on the power. In the blink of an eye, the Axopar 37’s twin 350-hp Mercury Verados have us moving at 35 knots.

Since its 2014 founding, Axopar has sold more than 1,700 boats worldwide. The Finnish company offers models in 24, 28 and 37 feet, with cabins, hard tops, open decks or T-tops. In May 2018, East Coast Yacht Sales became only the third U.S. Axopar dealer. Axopar had been reluctant to take on another U.S. dealer, because the builder was struggling to meet demand and the concern was well founded. In under a year, East Coast Yacht Sales sold 28 Axopars.

The Axopar we’re on, Finnish Touch, is a 37 Cabin and belongs to Jon Knowles, Ben’s father, a Maine resident and the owner of East Coast Yacht Sales. Ben wants to get the Axopar from Maine to his home base in Connecticut while his father is sailing in Norway.

Today’s plan is ambitious: to cover the 200 or so nautical miles from Yarmouth, Maine, to Stonington, Connecticut. We left at 5:20 a.m. and made our way down the Royal River at low speed. The weather forecast was not perfect—wind and clouds—but we deemed it more than good enough for the Axopar 37’s Offshore B-rating.

With no more scoters in sight, we have Casco Bay to ourselves. It’s mid-May—early in New England’s boating season—and we don’t encounter another boat until we near Portland, Maine.

I take the helm so Ben can launch his drone and take photos. As the boat accelerates, the twin-stepped hull keeps the bow down and at 25 knots we enter the Gulf of Maine. The photo shoot ends, I stop the boat and Ben lands the drone on the forward sunpad, which seems tailor-made for the purpose.

With the drone safely secured, I take the Axopar to 32 knots. Ben programs the autopilot for a straight run to the Cape Cod Canal and we settle in for the ride. For the next few hours we’ll be crossing open water. Finnish Touch planes across the Gulf of Maine with ease. We get 1.25 nautical miles per gallon from the Verados. At about 25 gph, the 192-gallon tank should get us to Connecticut without a fuel stop. At WOT this boat is capable of 45 knots or more, but our fuel efficiency would go down to .72 nmpg

The heavy May rains have sent all kinds of flotsam and jetsam into the ocean—we narrowly miss a 2-by-4, and we zip by a Christmas tree. A couple of fat eiders dive beneath the waves, and a dolphin comes up for air to starboard. At this speed, objects appear quickly, but we dodge them by simply turning the wheel, which automatically disengages the optional Garmin autopilot and eliminates the need to push the pause button. This setup makes split-second course changes faster and safer.

I brought my foul-weather gear, but despite the 52-degree temperature, I’m in a T-shirt, khakis and no socks. We’ve been running the diesel heater since we got on the boat at 5 a.m., and my bare feet are nice and toasty.

With its sporty, rugged look, simple systems and roll-back cabin roof the Axopar reminds me of a Jeep Wrangler. Ben demos the retractable aluminum-strut-supported canvas roof. At the push of a button, the cabin opens to the sky, making air conditioning unnecessary for New England boaters. I ask him about the Wrangler analogy. “I think it’s a Jeep Grand Cherokee,” he says, and I have to agree this boat is nicer than a Wrangler.

The white interior with walnut details, matte black dash, gray cloth seating and wheat-colored rugs is reserved and tasteful. It’s a nice blend of a traditional boat interior and clean 21st century design. The only flaw I can find is that the cup holders are too shallow. My water bottle won’t stay upright.

At the helm, Ben turns his captain’s chair into a bolster so he can stand at the wheel (the chairs also turn aft to face the dining table). It’s overcast, but the wheelhouse is nice and bright, and with windows all around, the visibility is excellent. The cabin is also remarkably quiet.

The Axopar has sliding doors to port and starboard, providing quick access to the bow and stern via ample side decks. There is no direct cockpit access aft from the cabin. Instead, the fixed rear window and L-shaped lounge help deaden engine noise from the stern. Sitting about 8 feet abaft Ben while doing 30 knots, we don’t have to raise our voices to hold a conversation.

The Axopar’s interior is modest for a 37-footer. That’s because the bow is long and thin, and gradually widens toward the stern like a wedge. Even still, the forward stateroom has a V-berth that converts to a queen, a sink and an electric head hidden beneath a seat. There is no standing headroom or shower in the forward cabin, but side windows and a large skylight make it feel large for its size. For a galley, Axopar offers an optional single-burner propane cooktop for the forward cabin or a kitchen package for the main cabin that includes a two-burner stove and a sink (an optional fridge fits beneath the port captain’s chair). On Finnish Touch, the Knowles family bought their own Magma propane grill.

Axopar’s philosophy is to keep things simple, so a boater has no excuses to stay off the water. Hulls are made of handlaid, woven fiberglass with a vinylester skim coat. Hull sides include Divinycell, and the deck and cabins use Corecell foam for weight savings, and to keep the boat’s center of gravity low. Axopars are light for their length— Finnish Touch, including engines, weighs 9,580 pounds dry—with the idea being that they need less power to go fast. And less power results in additional weight savings.

Thanks to the modular build method, Poland’s lower labor costs (Axopar is based in Finland, but the boats are built in Poland) and the favorable exchange rate between the U.S. dollar and euro, Axopars provide bang for the buck. With the 350-hp Verados, Finnish Touch retails for $260,000.

For owners who want more bells and whistles, Axopar has an arrangement with Brabus, the German company that customizes high-end cars, to make limited editions of the Axopar 28 and 37. Respectively called the Brabus Shadow 500 and Brabus Shadow 800, each boat includes a liberal use of leather, carbon-fiber reinforcements, racing engines and other upgrades. The Brabus boats are showy. The Axopars are unfussy.

Unfussy is fine by me. Just after 7 a.m. the visibility drops, and rain starts coming down. Ben fires up the radar and windshield wipers, and even though the wind is now blowing at 12 knots and waves are at 2 feet, we continue at 32 knots. We cross the Boston shipping channel and, soon, Cape Cod gives us some protection from the ocean swell.

As we approach the Cape Cod Canal, an Albin 45 passes us to starboard and throws a set of good-size wakes. Ben is unfazed. He maintains 32 knots, and Finnish Touch rises over the first wake, lowers herself down the other side and repeats the process until we’ve passed over all of them. With forward weight kept to a minimum and the hull’s deadrise quickly transitioning from 60 degrees at the bow to 20 degrees at the stern, the knife-sharp bow doesn’t bury down into the water.

We’ve been underway for more than four hours and we should have about 90 gallons of fuel left, but the gauge shows 70. With 100 miles under our belt, Ben opts to make a fuel stop. We take on 50 gallons, and as we slowly re-enter the Cape Cod Canal, the gauge shows 140 gallons. Since the math doesn’t add up, we conclude that the fuel sensor must sit forward in the fuel tank, giving us a lower reading at higher speeds. The good news is that the gauge errs on the side of caution. We observe the 10-mph speed limit in the canal, improving our fuel efficiency to 3 nmpg.

After we exit the canal and pass by the Massachusetts Maritime Academy, we encounter large, standing waves, but Ben simply punches the Axopar through them. Buzzards Bay appears in front of us: Ben had predicted we might find some snotty conditions here, and he is right. The waves are only 2 feet tall, but 15 knots of wind are colliding with the opposing current, and the combination has created a short, steep, ugly chop. We manage to make 25 knots, but it isn’t fun. Even the cormorants have taken refuge, crowding together on a buoy.

Ben proposes a detour through Woods Hole. He accelerates as he changes course, zigs at Hadley Harbor, zags at Woods Hole and pops into Vineyard Sound, where we find a much nicer ride. The sun is pushing through high cloud cover, the water is a lighter color, and things are looking up. At 31 knots, we run west along the Elizabeth Islands, but as we near the end of Martha’s Vineyard, the ocean swell rolls in, and we are forced to slow down to 25 knots again.

Soon, the frequency of the waves increases, and the troughs get deeper. The Axopar pushes its bow through the top of a wave, and Ben takes us down to 17 knots. As we pass Cuttyhunk, the conditions get downright gnarly. We go down to 15 knots, ride over the tops of waves, and dive down to the troughs, sending spray flying along both sides. A couple of times, we drop down fast enough that I rise slightly out of my aft cabin seat.

Finnish Touch has no trouble with the troughs, but with the weather coming from our port forward quarter, we begin a slow roll as we rise and fall with the waves. The Axopar 37 is narrow, but the boat’s double chines and low center of gravity give it a slow, easy roll without any snap. Uncannily, the windshield stays dry, but then the clouds darken, the water turns black, the wind kicks up to 20 knots, whitecaps appear all around us, and it begins to rain again.

Ben and I had planned to stop for an outdoor lunch on Block Island, but because of the weather, we decide to press on to Connecticut. Sitting on the aft seat, I recall Ben’s mother’s comment from the night before, when she called the Axopar 37 “a floating limousine.”

I may have just lost out on a nice seafood lunch on the patio at Dead Eye Dick’s, but as I look out the panoramic windows and Finnish Touch closes in on Stonington, I realize that Ben’s mom is right. All Axopar has to do is make those cupholders a little deeper, and I could stay on this ride forever.

This article originally appeared in the August 2019 issue.