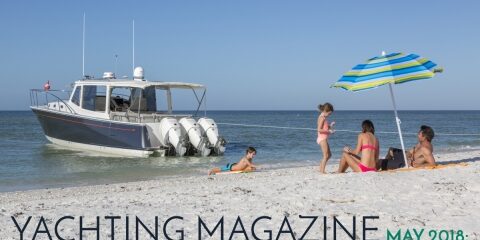 When Bob Johnstone, his wife, Mary, and son Peter launched MJM Yachts in 2002, the founders of the J/Boat sailing-yacht dynasty felt like they had entered the bizarro world. “I thought I’d be the last guy to own a powerboat company,” Johnstone says. “We decided to get into it because we’d owned a 29- foot Downeast-style boat, and it wasn’t designed for cruising. We used it a lot between racing on weekends but found that the head was small, the pilothouse was uncomfortable, and there wasn’t seating in the cockpit for guests.”

Much as they had done with J/Boats, the Johnstones came up with a formula, this time for a new-style Downeaster. They compiled a list of their favorite boats and cherry-picked features.

“The bow had to have a Carolina flare that could cross big seas without getting wet, have the sheer line of a PT boat, layout of a Maine lobster boat and sightlines of a ’50s Matthews cruiser,” Johnstone says. “Oh, and it had to be light, tough and luxurious.”

He designed 30 renditions of the first MJM yacht before finalizing it. As the builder, the Johnstones enlisted Boston BoatWorks, known for ultra-light- weight, oceangoing Grand Prix racing sailboats.

Fast forward 15 years to the MJM 43z — built on the same hull as the company’s 40z inboard, but with triple 350 hp Mercury Verado outboards. Two clients brought the idea to the Johnstones at the same time. One had owned three J/Boats in the 1980s and was on his second MJM, the inboard-powered 40z; he wanted outboards to avoid running aground in the shallows of southwest Florida.

I ran that owner’s 43z, Annabelle III, from his home port. The yacht has an elegant, long forefoot, tall pilothouse and soft tumblehome, with the white Verados on the stern. He chose a custom gray exterior with an orange stripe (he modeled it after the Porsche 911 GT3 RS) that makes for a stylish contrast to the white topsides. Simplytackingtheoutboardstothesterncouldhave ruined the classic MJM profile, but Zurn sculpted the transom so the new engines were integral to the design. The yacht also has two side doors and tran- som doors for access from the dock, and standard features that include helm electronics, Lectrotab electric trim tabs, a Fusion entertainment system, a VacuFlush head, an Indel Webasto freezer and a memory-foam mattress.

We only hit 1- to 2-foot seas during our test, but the yacht handled them without slamming. The 43z’s 45-degree deadrise at the bow transitions to 18.5 degrees at the tran- som, in a design that should give it a softer ride in big seas. Annabelle III can hit a 44-knot top-end in flat water, her owner says, though the top speed on our sea trial was 42.8 knots. The 43z turns crisply, like a much smaller boat, holding tight through the turns. It’s a fun yacht to drive. And though there’s a 3-foot draft, when stern-to on a beach with the outboards up, the vessel can sit in 2 feet of water.

Annabelle III’s owner likes the joystick piloting and Skyhook station-keeping system, and the 1-knot speed gain of the Verados versus his 40z’s inboard power plants (which he says produced more vibra- tion). The cavern in the 43z’s cockpit deck where the inboards were on his 40z holds an inflatable RIB, its outboard, a life raft and his golf clubs. He chose options including sliding-glass side panels, a power-opening windshield, a Seakeeper 5 stabilizer, a 6 kW Westerbeke genset, 32,000 Btu air condition- ing and KVH satellite television.

“THE BOW HAD TO HAVE A CAROLINA FLARE THAT COULD CROSS BIG SEAS WITHOUT GETTING WET, HAVE THE SHEER LINE OF A PT BOAT, LAYOUT OF A MAINE LOBSTER BOAT AND SIGHTLINES OF A ’50S MATTHEWS CRUISER.” — BOB JOHNSTONE, FOUNDER, MJM YACHTS
The pilothouse has two seats at the helm, with more guest seating forward of an L-shaped portside lounge, and a fold- down teak table and lounge to starboard. The helm station has Simrad electronics (4G radar, Evo3 chart plotter, autopilot) on 16- and 9-inch displays, with a smaller console for the Verados. A 24-inch Edson stainless-steel wheel with varnished teak trim is a reminder that this MJM is a New England-built yacht. Annabelle III’s owner also went with Esthec synthetic teak decking, for Downeast class without traditional teak’s maintenance.

The cockpit has movable chairs with Ultraleather cushions, and an optional overhead Bimini top for shade. The sliding windows and opening windshield let in plenty of air, while a Strataglass screen drops in back whenever it’s time to batten down the hatches.

The interior has a Herreshoff-style look with white surfaces for bulkheads and countertops, teak-and-holly soles, and cherry hardwood for the joinery and overheads. Salon headroom is 6 feet 6 inches. The yacht has a single stateroom for a couple, while the salon table and lounges convert to a double berth for guests. Multiple hatches and windows create airflow throughout the interior.

Johnstone says that while some people may think of the 43z as a competitor to other Downeast models, he sees the yacht competing for attention against the new breed of large, outboard-powered center consoles.

“Someone who is used to running 45 knots won’t be very happy in a Downeast boat,” he says. “But most big outboard boats have trouble escaping their fishing heritage when it comes to cruising comfort. We’re giving them the opportunity to put the family into a yachtlike atmosphere.”

BUILT LIKE A RACER
For two decades, Boston BoatWorks cut its teeth building multimillion-dollar Grand Prix racing sailboats, where every ounce counted. Now, the builder on Charleston Harbor in downtown Boston builds only the MJM line, using the same wet epoxy, pre-preg materials with vacuum-molding and post-cure oven processes. Epoxy resin is 25 percent stronger than the polyester resin used in most boatbuilding, with higher elongation properties for durability. Epoxy also has superior resistance to water degradation. BBW uses Kevlar in the outer skin to make the boat stronger and lighter. “MJM boats require less horsepower than many of their competitors,” says Scott Smith, BBW’s managing director. “In some cases, we’re half the weight of same-sized boats trying to gain speeds over 20 knots.” MJMs are also built for longevity. “The differences in the way we build the boat won’t be apparent for 10 years,” Smith says. “We’re coming up to our 250th MJM and are seeing 34zs we built 14 years ago in excellent condition. By using the best materials and methods, these boats will stay low maintenance and easy to use. It’s a boat that you can pass along.”