Form and function get a contemporary makeover on the Sirena 58.

It would be easy to describe the Sirena 58 as another pretty example of European style and leave it at that. Certainly her profile—with plumb bow, fully windowed house, and crisp superstructure accent lines—is enough to draw approving glances at any marina. Doing so, however, overlooks a host of substantive features, including the healthy dose of yachting passion that went into the design, engineering, and construction of this new model. 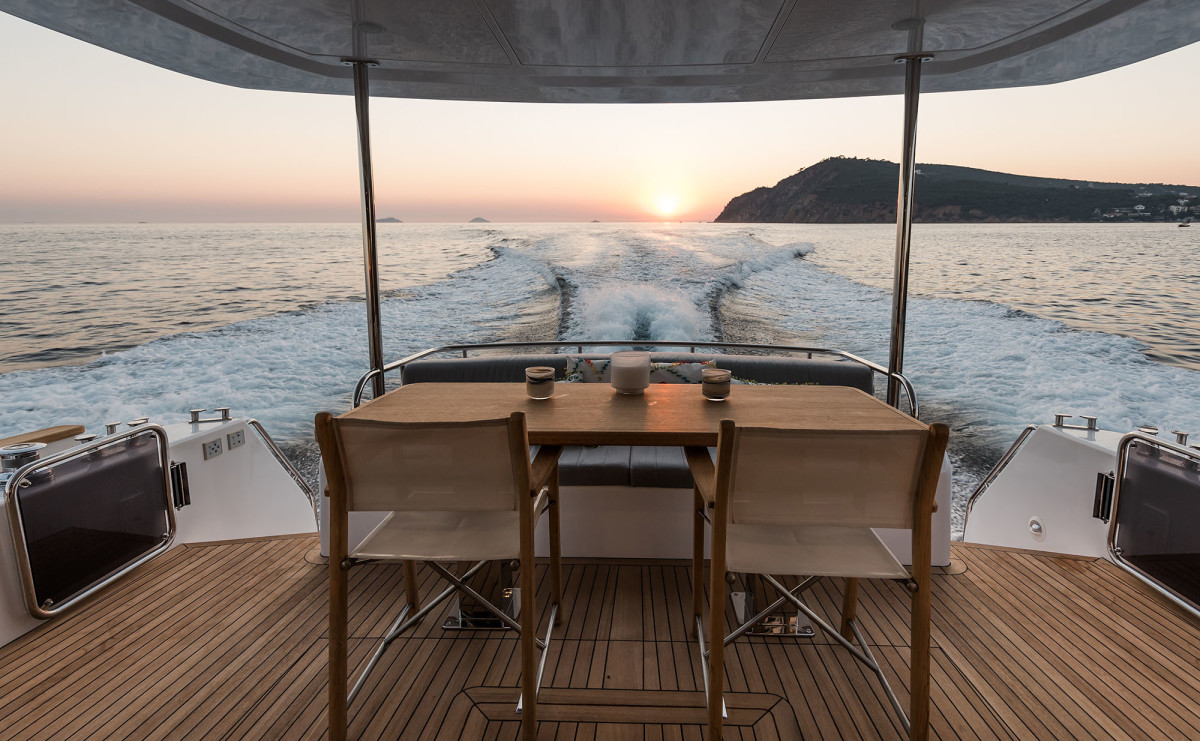 It’s about more than her electrohydraulically operated lay-down antenna mast, which should appeal to any mariner who has to deal with low bridges, or her hydraulic tender platform, which makes launch and retrieval a breeze—even when shorthanded, anchored in a seaway.

I’m talking about, for example, an inspired hull form that runs at an almost constant (and nearly level) angle of trim at her 10-knot displacement hull speed right up to WOT planing speeds of 27 to 30 knots. In fact, nearly everything about this 58-footer speaks to a happy marriage of form and function.

The 58 is built in Turkey at Sirena Marine’s ISO-certified, 1,600,000 square-foot facility. Concept, exterior styling, and hull design are by Argentinian naval architect Germán Frers, with interior design and styling by Italian designer Tommaso Spadolini. Frers’ team is well known for racing sail design. In my experience, those types truly grasp the principles of how to get the most from a hull’s underbody to achieve the evenly-distributed lift that characterizes semi-displacement form, holding virtually constant trim through stepped increases in speed. 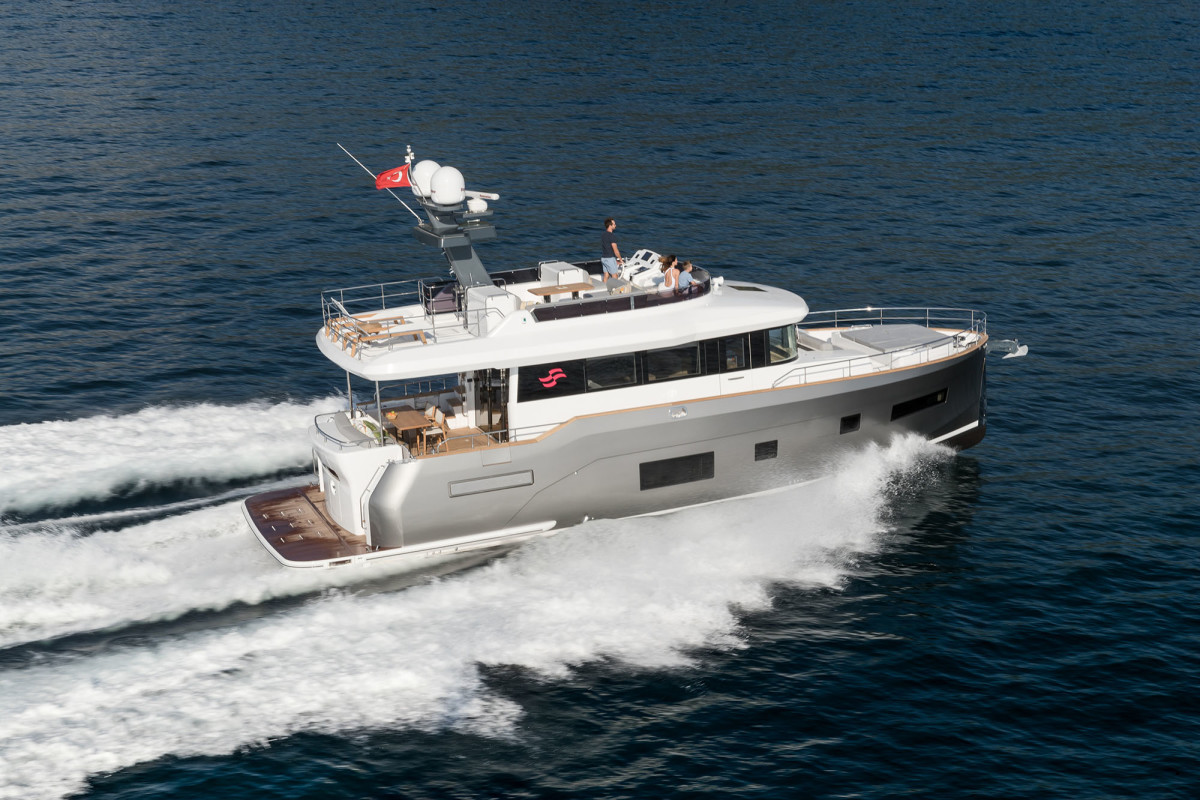 Unlike most full-planing hulls, the Sirena 58 does not require massive propulsion to come on plane. Rather, her semi-displacement hull utilizes lift along most of her underwater length to decrease her running displacement (underwater volume). In doing so, she gains the ability to run faster than what is commonly referred to as “displacement hull speed.” The difference is evident from the position of her bow wave and the flatness of her wake at a speed-to-length ratio (S/L) greater than 2.25, as well as how she rides and handles at speed in a seaway.

On sea trial, the Sirena 58 demonstrated a smooth, dry run while outside in an Atlantic chop, even when we pushed her to 25 knots with a full load. She behaved well in both head and quartering seas and was fully controllable in hard-over turns at WOT. At 1940 rpm (which is backed off 15 percent from her max-rated 2300 rpm), the Sirena 58 made a solid 17.8 knots in a two- to three-foot chop without a fuss or any spray above the rail. At her nominal “displacement hull speed” of 10 knots, she literally purred along, as smoothly and as quietly as it gets.

The 58 carries 950 gallons of fuel for a range of 850 nautical miles at 10 knots in calm seas. To me, that makes her an excellent candidate for extended alongshore cruising and island-hopping. I might not describe her as a true offshore passagemaker, which to me means the ability to make the crossing from Newfoundland to Ireland, although her range is measurably increased at a passagemaking speed of around 6 knots.

The 58’s interior styling, fit, and finish is on par with the best of world-market competition, with an array of genuinely comfortable spaces, styled with joinerwork and furniture in finishes that enhance the yacht’s airy and open ambiance. Wraparound glass in the main deck house encompasses the salon, pilothouse, and the popular galley aft, which caters to inside/outside dining. Large built-in settees provide adequate seating for any likely complement of guests. The lower helm area is tucked neatly out of the way, in the European manner. 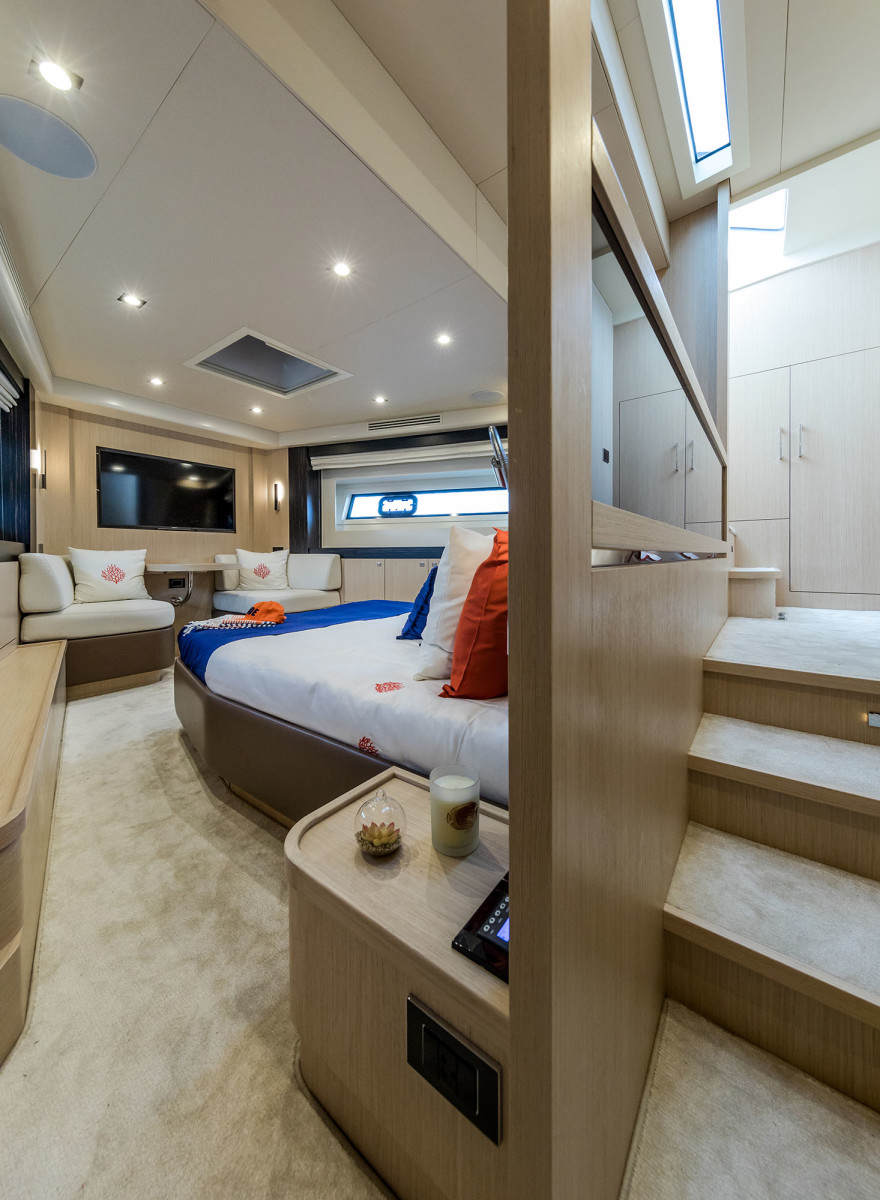 The Sirena 58’s full-beam master stateroom is roomy and bright, a far cry from the typical ‘cave effect.’

The word here is “balance.” Spadolini took a minimalist contemporary approach in the salon, allowing a roomy aft deck lounging area with a large settee and an outdoor dining table. Natural light from the wraparound windows gives the interior a feeling of spaciousness. There is plenty of elbow room to accommodate the natural traffic patterns of onboard guests. A glass door abaft the salon merges the interior and exterior, noticeably extending the overall living space on deck.

Not needing to house a tender and davit up top serves the flybridge well, allowing an outdoor entertainment space befitting a yacht 10 feet longer, complete with sunpad, built-in seating, a large dining table, space for a grill, and a full helm and navigation station (which, for me, would inevitably become the main control station). Wide side decks and hip-height bulwarks give the Sirena 58 an aura of a much larger yacht.

The lower deck comes with three optional layouts: 1) standard three staterooms; 2) two large staterooms; or 3) three cabins. In options 2 and 3, the forward master stateroom can be fitted with stairs and a companionway, which allows direct access to the foredeck. (All layouts have the option of an aft crew quarters.)

To each his own, but for my money, the standard three-stateroom layout seems to be the most versatile. The two-stateroom version allows for roomier cabins but lacks the extra berths that come in handy when the family convenes en masse. Option 3, the three-cabin layout, sacrifices the full-beam midship master stateroom, which I consider a top-shelf feature for a yacht of this size. If it was my boat and I didn’t really need the twin-berth cabin in the standard three-stateroom layout, I’d build that space out with a settee-style berth and Pullman, with a small desk for a quiet refuge to read or work.

A Game of Inches

Back when I was active in yacht design, we would quip that the way to get big accommodations into a midsize yacht is to design the hull at a scale of 1 inch = 1 foot, then draw the yacht’s accommodations to a scale of ½ inch = 1 foot, essentially packing a quart into a pint. Sirena has achieved essentially the same thing, not by downsizing every interior feature to dollhouse scale, but with intelligent design and engineering. Case in point: the 58’s engine room. Many extended-cruising yachts employ as large an engine room as possible, often at the expense of accommodation space because, well, “a proper trawler needs a proper engine room.” I’ve seen engine rooms more spacious and luxurious than the yacht’s galley. To the contrary, the Sirena 58’s engine room has footprints of Frers’ history in sailing yachts. Intelligently sized and well-utilized, it does its job without intruding on valuable interior volume. Standard propulsion is a pair of Caterpillar C8.7 diesels. The 8.7-liter engines each produce 641 brake horsepower (bhp), for a total of 1,282 bhp. If you’re into numbers, the weight-to-horsepower ratio of these turbocharged, supercharged and after-cooled engines is 3.58, which is pretty weight-efficient in a way that might be overlooked by devotees of slower, heavier traditional trawlers. For reference, compare the Sirena 58’s engine package to, say, a 550-bhp version of the 9-liter John Deere 6090—the darling of the Pacific Northwest small commercial vessel fleet. Whereas the Cat C8.7 has a pounds-to-horsepower ratio of 3.58, the John Deere 6090 has a ratio of 4.28, making the John Deere engine heavier per unit of power production by about 17 percent—a significant difference to a naval architect. My point is that the Sirena 58’s design was relatively uninfluenced by the ingrained assumptions and conservatism of the trawler set.

The engines are installed in a V-drive configuration, placing them farther aft where noise and vibration are more readily isolated and attenuated. Another smart choice on our test yacht was a Webasto V-series chiller-type HVAC system with “zero peak starting loads” thanks to cutting-edge inverter technology and variable speed refrigerant compressors. The systems are energy-efficient, eliminating the high peak starting loads (five to seven times greater than average running loads) demanded by traditional constant-speed compressor systems—the most important factor in generator sizing for a yacht.

Sirena’s 58 has the looks to turn plenty of heads, but she makes her bread beneath the surface. From her smooth-running hull form to her lightweight hybrid carbon fiber deckhouse and flybridge structure, the Sirena 58 seems to reflect her handlers’ underlying passion for yachting. That’s something to which we can all relate.

You can use this tool to change your cookie settings. Otherwise, we’ll assume you’re OK to continue.

Some of the cookies we use are essential for the site to work.

To control third party cookies, you can also adjust your browser settings.